How it all started? - History of PHP 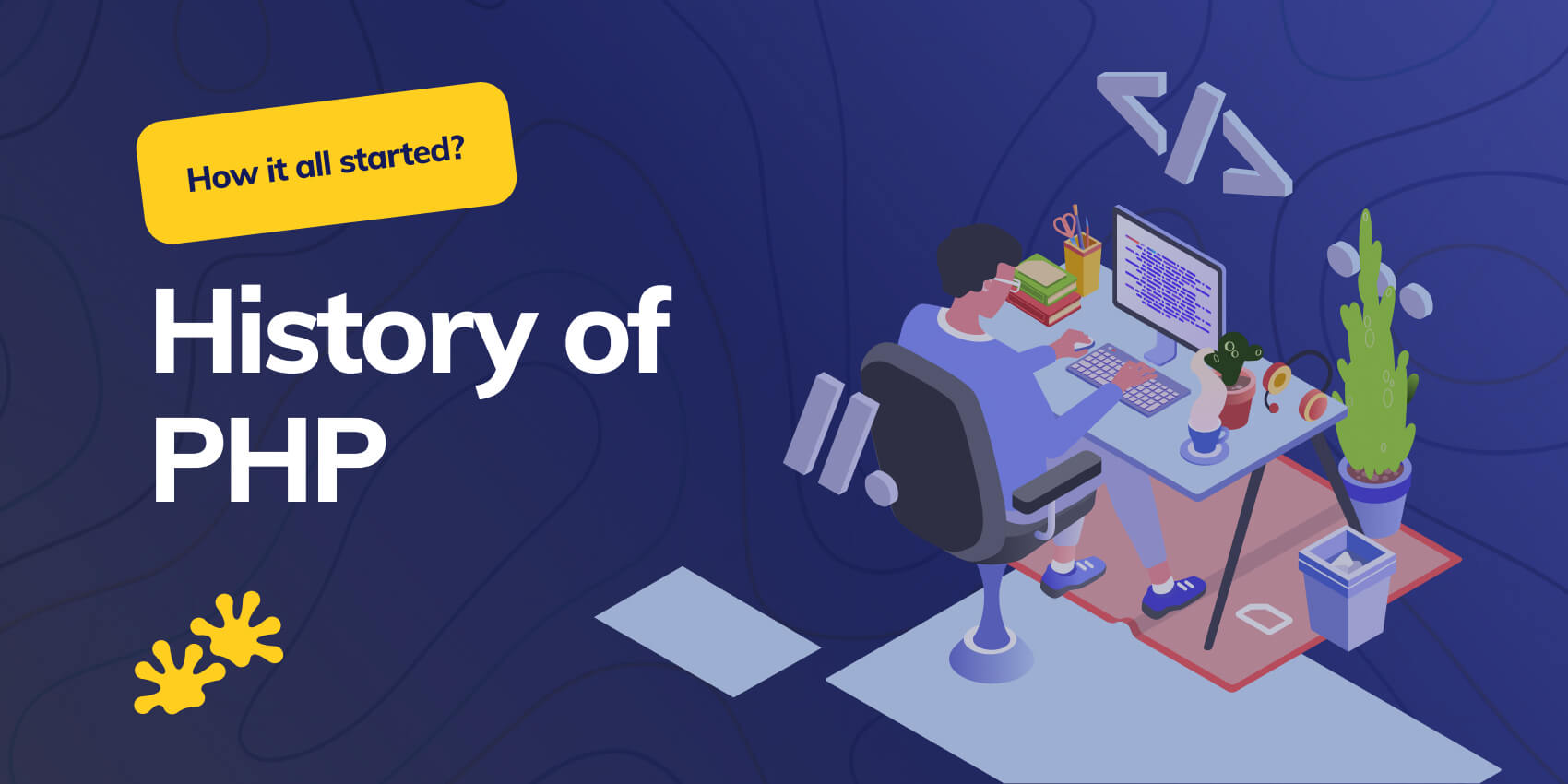 PHP is one of the most known and widely used programming languages in history. It is used by web developers to build dynamic websites that can interact with the database. While HTML is what made the web possible it is the PHP that made it interactive.

The PHP code is well organized and can be easily embedded into HTML code. It works on all major operating systems, and it supports all main web and enterprise servers like Apache or Netscape. For a web developer, PHP proves to be useful in the case of designing and creating a complex website in a short time. It can be used with popular frameworks like Laravel and Symfony.

According to BuiltWith, PHP is used in over 50% of sites among the top first million websites, in the case of W3Techs data shows that PHP is used by 78.1% of all websites with a known server-side programming language. We know one thing for sure, PHP helped with increasing the popularity of the network, without it, the Internet would not become what it is today.

What we know today as PHP is actually the successor of a project named PHP/FI that was used for web development, to build simple, dynamic web pages. The story starts in 1994 with Rasmus Lerdorf who wrote a few programs in C to maintain and perform some actions on the static website that he had created for himself PHP originally stands for "Personal Home Page" and it was used to manage online resumes and other personal-related information. Lerdorf combined PHP with his own Form Interpreter and released it as PHP/FI. The fun fact is that he did not want to create a new language, as he later said: "I really don't like programming. I built this tool to program less so that I could just reuse code."

After the release of the first version, a development team was formed to work over the second version. This second-generation implementation started to evolve PHP from a suite of tools into a programming language that we know today. It included built-in support for DBM, Postgres95, and mSQL databases, cookies, and much more. The team released official version 2 of PHP/FI in late 1997 after a lot of beta testing.

The code example in PHP/FI 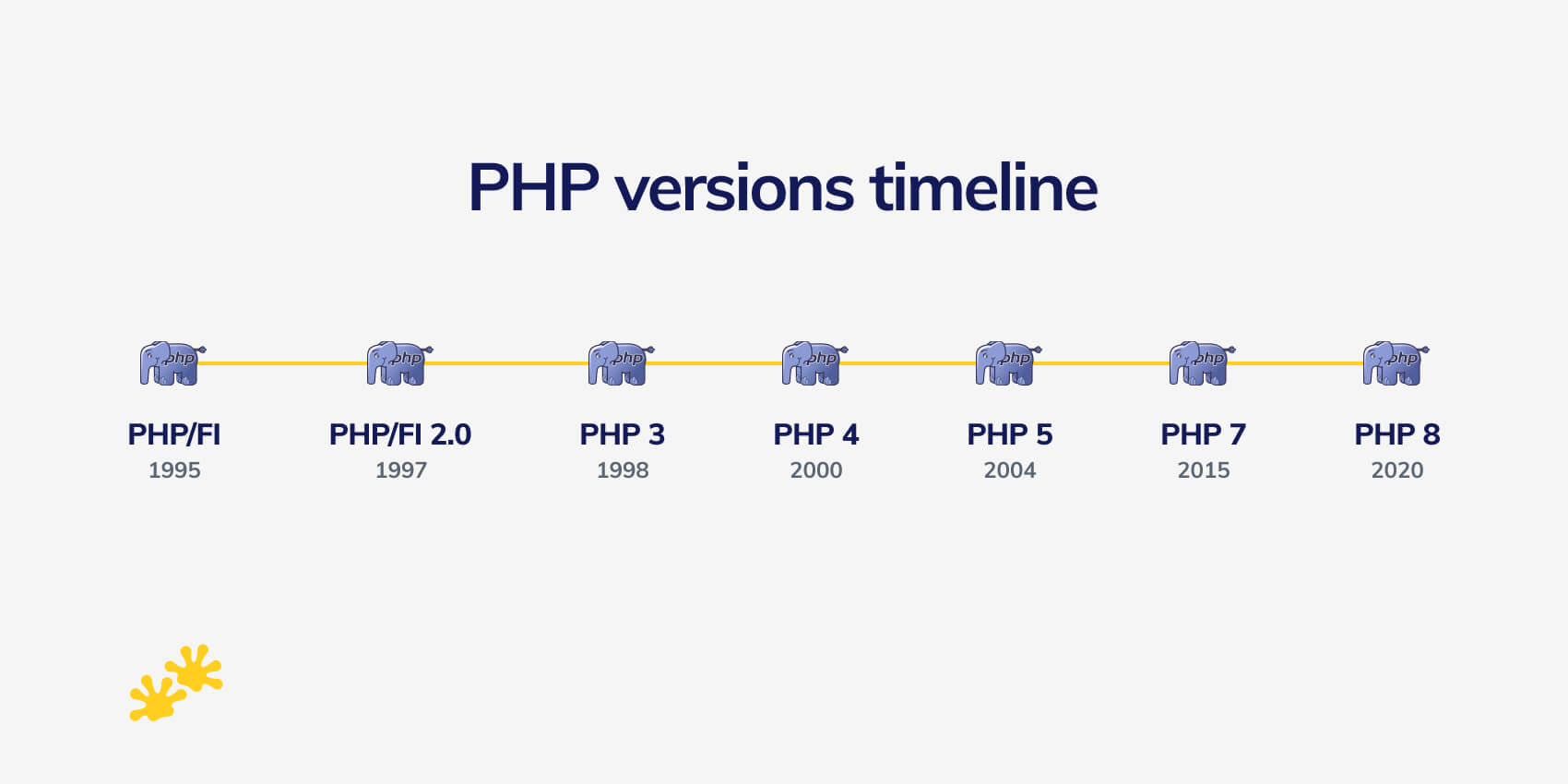 The base for PHP 3.0 was made when PHP/FI 2.0 turned out to be inefficient as well as it was missing some features needed for the eCommerce application that was developed by Andi Gutmans and Zeev Suraski for a university project. After all, they decided to rewrite the parser in 1997, and that inevitably led to creating a base for PHP 3.0. The acronym was also formally changed to PHP: HyperText Preprocessor, at this time.

One of the biggest strengths of PHP 3.0 at the time was its strong extensibility. It provided users with a complete interface for multiple databases, protocols, and APIs. This was one of the keys to PHP 3.0's success as well as object-oriented programming support and a far more powerful and consistent language syntax. After nine months of public testing, on the day of the official release of PHP 3.0, it was already installed on over 70,000 domains around the world.

In the winter of 1998, shortly after PHP 3.0 was released, Andi Gutmans and Zeev Suraski began work on rewriting PHP's core. Version 4 of PHP occurred in 2000 with their new Zend Engine that made it a much complete language. After 2 years of work, the engine coupled with new features gave foundations for PHP that we know today. But that was just the beginning, shortly after releasing PHP 4, the team started working on Zend Engine 2. After 4 years, the new version was launched in July 2004, whereas the next release needed almost eleven years to be released.

Getting back to version 5, it had features like PDO Extension, improved support for OOPS, 64-bit support, built-in debugging, generators, namespaces, and many more. It enabled developers to work on each other’s code effortlessly. Besides, object-oriented scripts with a broad variety of functions made this version more flexible and gave new options for creating dynamic content.

Of course, among the most popular uses of PHP, we need to point out Facebook. Mark Zuckerberg used this language in 2003 and 2004 when he was working on it in his Harvard dorm room. Since then the company has developed its own language Hack that is a version of PHP prepared to scale efficiently.

PHP 6 - The one that is missing

You can ask, why don't we have PHP 6? Well, the answer might be not that easy. Some say that the 5.3 could be named “PHP 6” since it had so many features added at the time. On the other hand, it’s hard there have been attempts at releasing PHP 6 in 2005, which was meant to add native Unicode support to PHP, but those efforts never succeeded.

When the team started working on PHP 6, UTF-8 was not widely supported, it changed during development, the industry decided to standardize on this. Adoption of this more forgiving encoding helped with a lot of the problems that PHP 6 was trying to solve and made the objectives less relevant. Indeed, PHP 6 never reached General Availability, but it needs to be admitted that it was still very widely known and spread among the community gathered around php.net.

PHP 8 was introduced last year, before that we had PHP 7. The aim behind that version was to improve performance and reduce memory consumption. The reason for that is the growing popularity of dynamic applications, cloud solutions, and overall growth in the IT industry. PHP 7 introduced the new Zend Engine 3.0, the above optimizations were possible due to refactoring of the Zend Engine and preserving the near-complete language compatibility. This release is considered to be the most important change for PHP after the release of PHP 5 in 2004.

Because of the breaking changes that PHP8 is bringing, there's a chance that you will need to make some changes in your code to get it running on PHP 8. To be honest, if you kept up to date with the latest releases though, the upgrade shouldn't be too hard, since most breaking changes were deprecated before in the 7.* versions. Among all these, the most discussed feature is the JIT compiler, but we will cover that in future articles.

Is the PHP dying?

Normally, I would name this paragraph “Conclusion”, but this time let’s ask the question that is showing up around the network. Is the PHP dying? To be honest, no, at least any time soon. Let’s think for a minute about COBOL programming language, some of the old financing systems, those used by banks, and insurance companies, were programmed using COBOL.
The reason for that is simple, it still works.

The question is if any programming language can die in the life span of one person. It’s hard to decide, but the fact that even COBOL is not dead might show you that it’s not such an easy question to answer. Deep down we all know that PHP will stay with us for a long time, even if you personally hate it.

If you have a problem with choosing the best language for your project - just contact us!